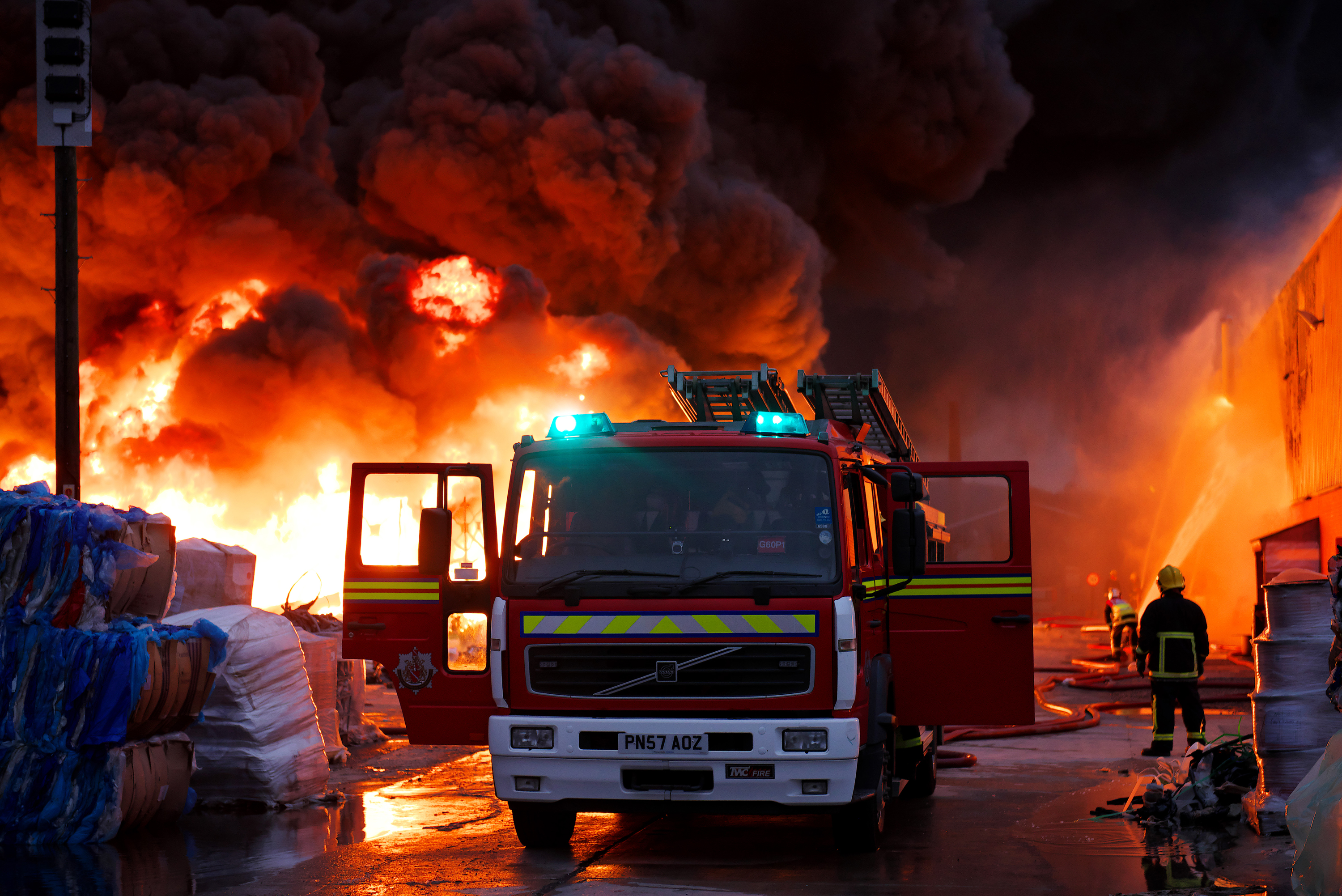 keep up to date with the latest news

We will provide regular updates to this page 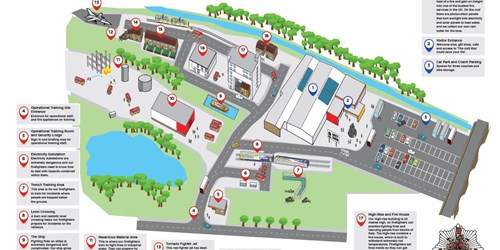 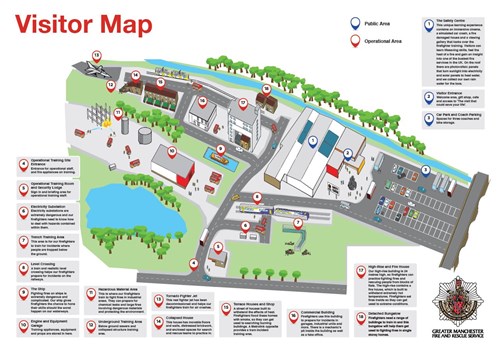 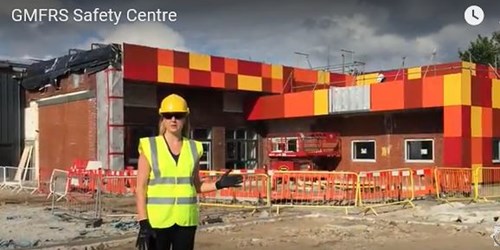 Construction Update - inside the Safety Centre

Construction Update - inside the Safety Centre

Take a peek inside the Safety Centre 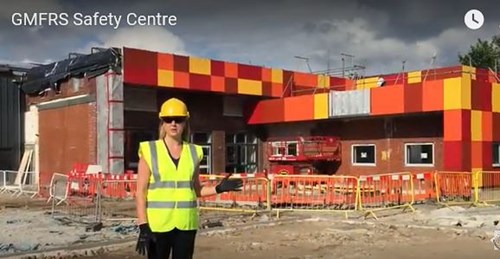 We're looking for Primary School Key Stage 2 groups to help us with our test tours. To nominate your child's school or a school you have connections with, email safetycentre@manchesterfire.gov.uk

Red Watch Eccles Boat Crew demonstrated a water rescue which was filmed and will be shown in the immersive theatre at the new GMFRS Training and Safety Centre as part of 'A day in the life of GMFRS'.

It's nearly September, but temperatures are still high and you may be tempted to cool off with a swim in a local river or lake or in the sea. Think again! Swimming in open waters is far different to swimming in a public pool. The temperature can claim your life in minutes – even if you are a strong swimmer.

On entering the water the body goes through an automatic gasp reflex which can lead to water being breathed into the lungs.

In cold water blood flows to the core of the body to protect vital organs, meaning muscles in the arms and legs don’t work well, which often leads to people getting into difficulties because they lose movement.

The heart can also be affected as it works harder to pump blood throughout the body and because of the shock the body feels on entering the water. Hypothermia due to the temperatures is a real risk and many people have been known to hyperventilate, which can lead to unconsciousness.

Swim some where safe - the swimming baths.

Here are some great shots taken during filming.

GMFRS crew are briefed before filming. 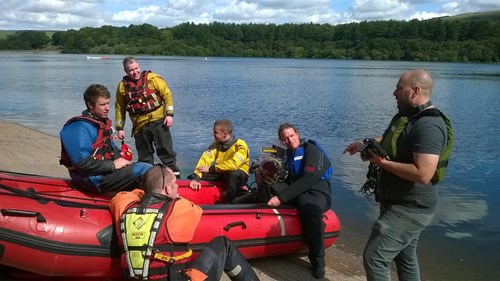 Cracker saves himself, but where's the casualty? Boat Crew set off to search for him, closely followed by the film crew. 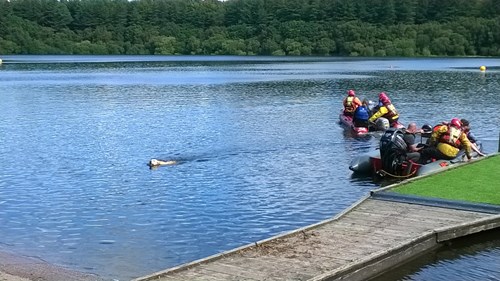 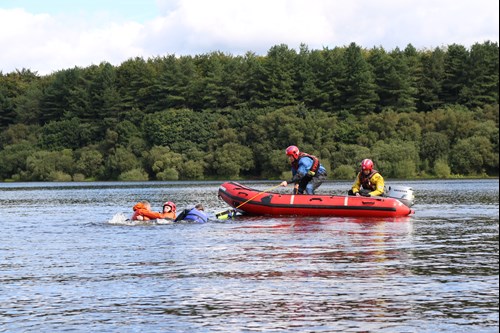 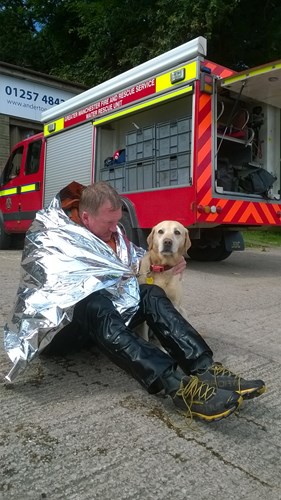 Thanks to Red Watch Eccles, The Anderton Centre, their trainee power boat driver Matt, James for his support and Adam Palmer for the photographs.

The GMFRS Community Safety Training and Development team visited the new Training and Safety Centre to check out construction progress. The team are responsible for creating the visitor learning experience and activities throughout the centre. 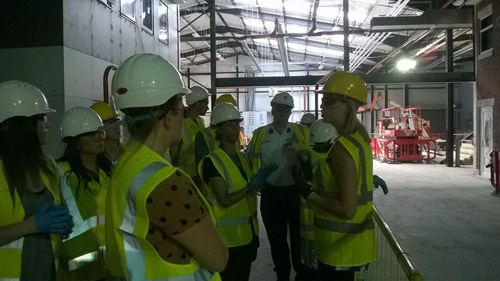 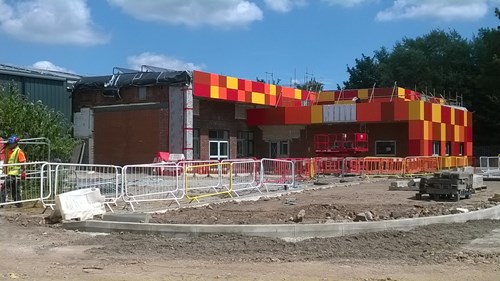 The immersive theatre screen is in place 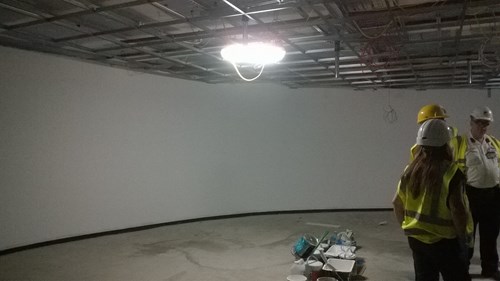 Crews are stars of the big screen

Crews are stars of the big screen

Crews from Blue Watch Bury and Whitefield play starring roles in our RTC film that will be shown in the immersive theatre at the new Safety Centre being built in Bury.

An actress plays the casualty, but everyone else are real firefighters doing what they would do at an RTC.

Here's some shots of Blue Watch in action during filming.

WARNING THIS IS NOT A REAL INCIDENT BUT CONTAINS GRAPHIC SCENES

The Crew in action 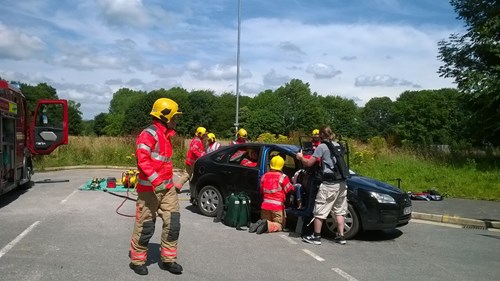 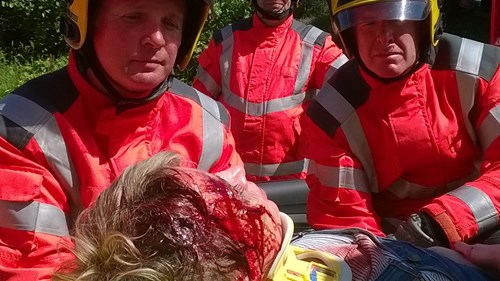 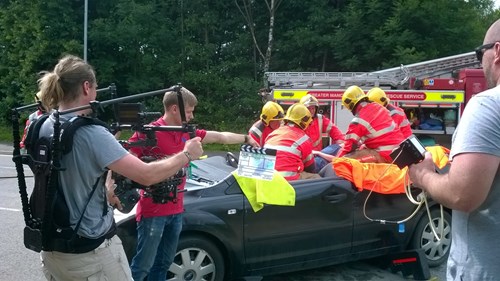 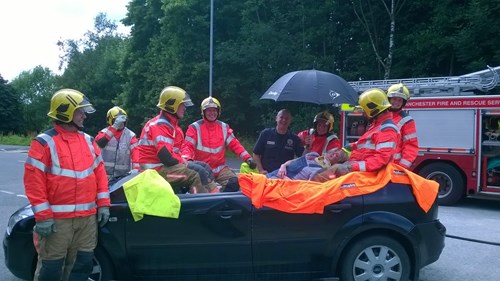 Bury and Whitefield waiting for the next scene 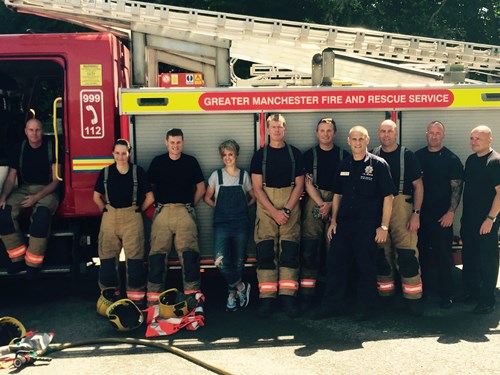 Everyone needs a break in the hot sun 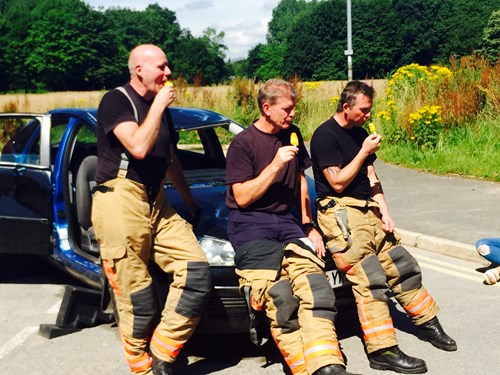 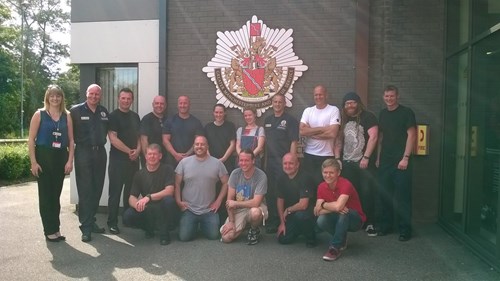 This week, we have been working Stephen's Primary School in Bury to create clips for our film that will be shown in the immersive theatre at the new Safety Centre.

Bury Red Watch Manager Pete Fletcher and Firefighter 'Buzz' Robertson gave an engaging insight in to the work of the crew and Trauma Technician James Hartley taught a group how to do CPR. 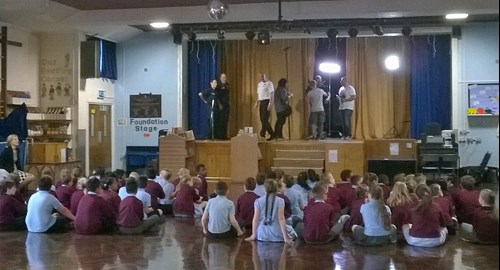 Zoya demonstrates CPR is child's play, whilst her peers eagerly watch and wait for their turn. 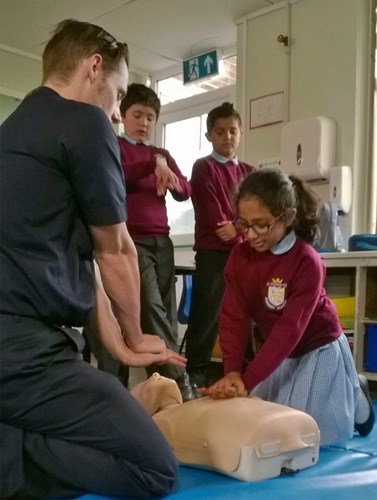 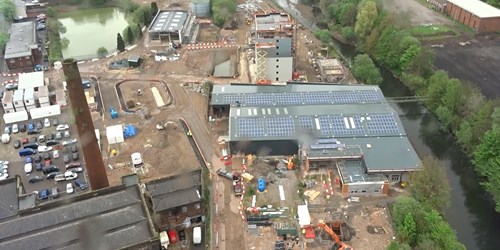 The construction of the Training and Safety Centre is now progressing fast. We should have the keys to our new home by Mid October.

In the picture you can see the extensive area of the Safety Centre, including its many solar panels and behind it is the purpose built high rise for operational training.

The building of one of Bury's newest streets at our Safety Centre is looking good.

There will be a full size 'firehouse', a Survival Academy, Control Room and much more.

Welcome to the first blog about the construction of our new operational training site and community safety centre in Bury. My name is Sean Booth and I am leading on the project. I will be blogging about the operational training part of the development. If you click here you can fly through and see what the finished site will look like.

We intend building a site where we can train all of our firefighters and officers to deal with all of the different types of incidents they may encounter including fires in houses, commercial and industrial buildings and in vehicles or on roadways, road traffic collisions, Metrolink, rail and aircraft incidents, collapsed buildings, water rescues, rescues from height and many other scenarios.

We bought the site in 2013 and have spent a year or so getting our plans together and gaining planning approval.

We started work in May 2015 and our first job is to clean-up the site – we expect this will take another 10 weeks before we’re ready for the construction to start.

As we are cleaning up the site we are finding lots of voids, pipes and water courses underground and we are making sure they are all removed, filled in, renovated or avoided and left in situ as required.

The next step will be to strip off the cladding on the existing large warehouse buildings ready for them to be renovated.

They will have new cladding, which will make them look much smarter than they do now and will also ensure they last 25 years before they need any replacement and they will also provide far better sound and heat insulation.

The construction team has welcomed its first apprentice on board. Matthew Wong, aged 22, started a Site Management Apprenticeship at the site on Monday, November 9.

He will be working with Kier Construction Northern, who is developing the site for GMFRS, for the next 12 months.

Matthew, who lives in Middleton, said: “I went to university in Huddersfield to study Business and Entrepreneurship but didn’t like it so I left and since then had just been working on various sites doing fire protection.

“I saw the Bury training site apprenticeship on a job site online and went for it – and I am really enjoying it so far. I get to do a bit of everything and it’s different to anything I’ve done before – so it’s perfect.”

Matthew’s apprenticeship – the first in a number of opportunities for young people that will be available as part of the project – is being run by the Greater Manchester Chamber of Commerce Group Training Association (GTA) in partnership with Kier and GMFRS.

A number of other apprenticeships will be created as part of the project in trades such as bricklaying, plastering and joinery.

Matthew continued: “I’ve seen the 3D fly-through of what the site will look like and I think it’s going to be amazing. I’ve been on a lot of building sites up and down the country since I was 17 and this is like nothing I’ve ever seen before.

“The site will have so many different scenarios for training and for the community to see what the fire service does and learn about safety. I think it’s brilliant – I’m really proud to be involved and I can’t wait to see what it’s like when it’s finished.”

Chairman of Greater Manchester Fire and Rescue Authority, Councillor David Acton, said: “I’d like to welcome Matthew on board and wish him the best of luck in his apprenticeship journey with Kier in conjunction with GMFRS and the GTA.

“I think it’s fantastic that so many young people from Bury and surrounding areas will have the chance to work on such an exciting project, learn vital skills and gain lots of fantastic experience.”

These photos from our AIR Unit show how work is progressing at the new Bury training and community site. The images were taken on Friday, October 30.

As you can see from the images the excavation work is not far off being complete on the whole site. Excavation of the original canal has taken place and this is where the ship simulator will go – allowing firefighters to train for ship-related incidents (see photo below).

Work is taking place on the steel structure of the community centre, which is being transformed from a vacant warehouse into an interactive community facility. The steel frame has been completely stripped back and painted – you can see the structure in the centre of the first image.

The foundation works have also been laid for the high-rise building on Fire Street – this is the area just above the community centre in the image. This is where firefighters will be able to train for real fire incidents (photo below).

Below you can see a map of the site, which explains the different areas.

Below are some more photos of some of the work in progress. 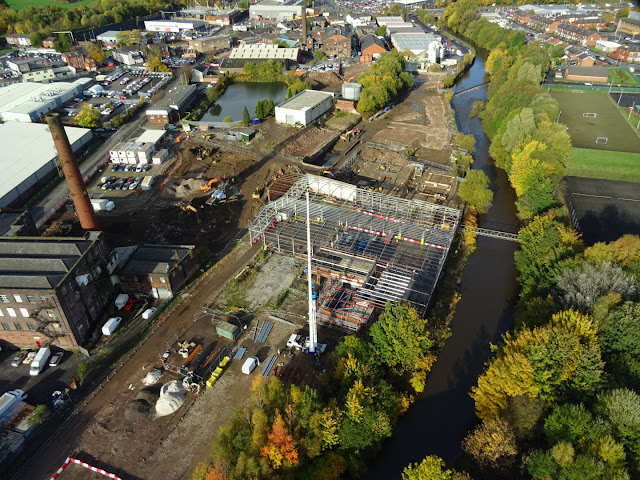 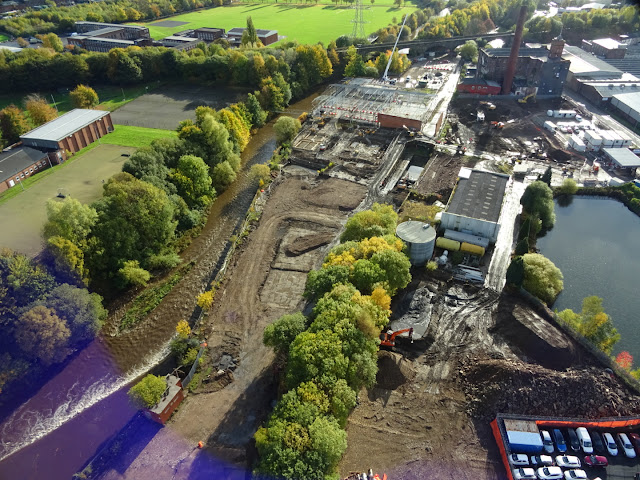 The best firefighter training site in Europe is taking shape!

The best firefighter training site in Europe is taking shape!

We’re building a state-of-the-art training super centre in Bury that will offer interactive visitor experiences for the public and world-class training facilities for our firefighters. It’s a really exciting project that will see GMFRS making a huge investment in Bury – creating business and job opportunities as well as a permanent community facility.

Work began on-site in May 2015 and the development of the centre is expected to take around 18 months. During this time you can find out about how the project is developing, with updates from some of the key people involved, by reading our blog.

AERIAL photographs have been taken which show the progress of building work at the site of the new GMFRS Training and Safety Centre in Bury.

The spectacular images were taken by the GMFRS Air Unit, which flew over the site as part of a recent exercise involving a local crew and members of the GMFRS Technical Response Unit.

The images show work on the row of terraced houses - Fire Street, steel work for the collapsed structure, foundations for the commercial property and the steel frame of the multi –rig, which will help firefighters train for incidents in high-rise buildings.

As you can see in the pictures below work is moving at quite a pace on the site, which will be one of the best training sites for firefighters in Europe and probably the World! 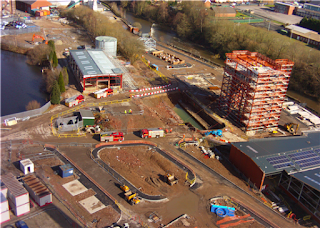 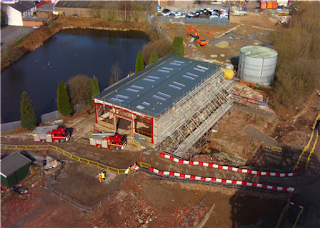 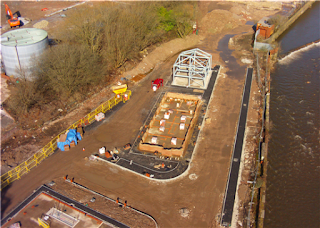 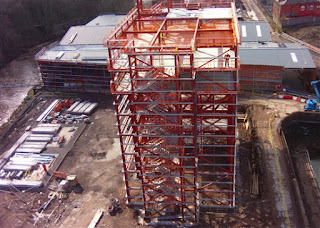