The table shows our visits over August- September. The team have worked really hard to ensure we get lots of visitors to the Safety Centre, overall we have had over 2000 people join us. September is always a quieter month for us due to schools just going back, and the centre being booked out for the recruits for the first two weeks.

On the 1st August three of our Community Instructors David, Rebecca and Charlie, along with Safety Centre Manager Julie, held a stall at 999 day. We were able to provide lots of information to families and carers about the centre. It was an extremely busy day and we gave out fire safety freebies to the general public.

We spoke to childminders, school teachers, church groups and many more about the Safety Centre and what an amazing opportunity it is to come and visit us. 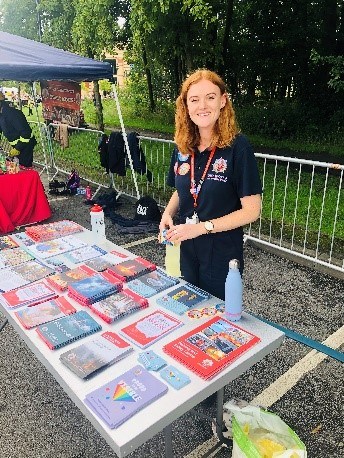 Staff member Rebecca at 999 day, ready with leaflets to hand out to the community.

Scenario Week follows a comprehensive schedule that provides new recruits with the opportunity to consolidate learning by responding to realistic incidents in a controlled environment, undertake prevention and protection activities on actual buildings with real life issues, and gain a true perspective on what is expected of an apprentice firefighter and preparing them for station life. 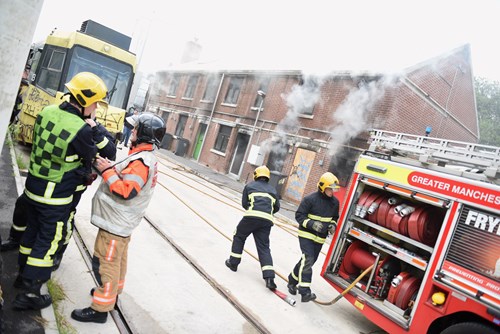 Recruit firefighters learning how to fight a fire in terraced house. 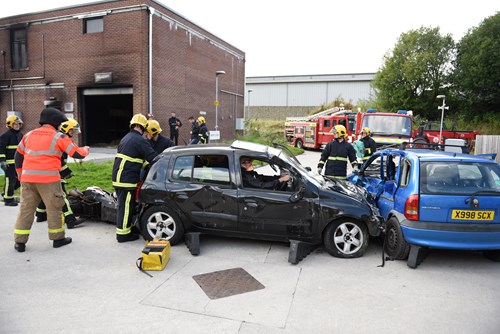 The apprentice firefighters were split between two stations and four watches with each apprentice completing two early shifts and two late shifts, with the daily routine being as close to a typical shift as possible. They paraded at the start of shift, followed by Breathing Apparatus and appliance checks. During the week, they responded to incidents and completed community fire safety and risk reduction activities. Just like on a fire station, each shift was completed with cleaning and preparation for shift change over.

For our Summer event this year we decided to plan an open day for the general public. Considering it rained heavily, we had a great turn out of around 400 people. Our Community Instructors ran tours of the Safety Centre throughout the event looking at the control room, mobilisation area, theatre and our house full of hazards!

A ‘chill out area’ was made up full of magazines, children’s games, colouring activities, yoga poses and meditation books. This space created an area for the public to relax and enjoy some quiet time either with their families or alone.

There were rides and entertainment for children including a bouncy castle, fairground rides and the children’s fire engine. They all took place outside the centre either in the carpark or in our Road Traffic Collision area.

The Firefighters Charity raised £290.17 with all the proceeds from the cake sales going towards them, including a contribution from anyone who had profited from the day.

An amazing day was had by all and The Training and Safety Centre would like to thank everybody who attended, both partners and guests. A big thank you to all the staff for all the hard work which went into the day, and all our wonderful volunteers for your support.

This year we joined Wigan’s safeguarding children’s board for their annual young person engagement event. The event was a great success and we were able to network with numerous high schools in Wigan such as Fred Longworth High School, Atherton Community School and Golbourne High school. We were able to take the driving sim with us, which went down well despite the weather, and we had many of the students practising their driving skills under a variety of simulated distracted situations.

The students and staff took great interest in the Safety centre and we were able to promote our KS3/4 programme to them. Special thanks to Community Instructors Collin Moran and Rebecca Sutherland, Trainer Neil Eppleston and Volunteer Sue Abbott for your support on the day. 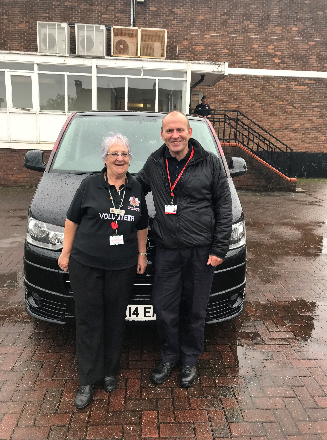 On the 27th September we held a McMillan coffee morning from 10am-1pm. Many cakes were bought, donated and made for the event from both staff and the GM community. A special thank you to Tesco who donated 9 trays of cupcakes! Our cake judges were Chaplin Beryl Proctor, Group Manager Val Hussain and Watch Manager Dave Berry - with great deliberation their chosen winner was Community Instructor Luke Rees with his beautiful rainbow pride cake!

The event began with the cake competition followed by one of our Community Instructors, Charlie Restall, shaving off all her hair for charity! We raised a whopping £714.82 for McMillan cancer support and Charlies hair is being donated to the Little Princess Trust charity. A massive well done to Charlie from all of the team at Bury Safety and Training Centre.

To conclude the event, we had a raffle. A variety of prizes were won such as Wilkinson’s vouchers, two Vue Cinema tickets and £40 in ‘love 2 shop’ vouchers. Thank you to the stores for their donations. 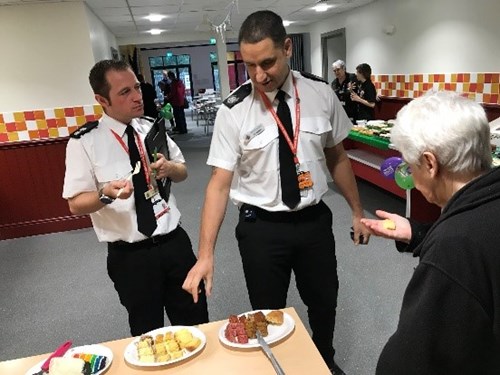 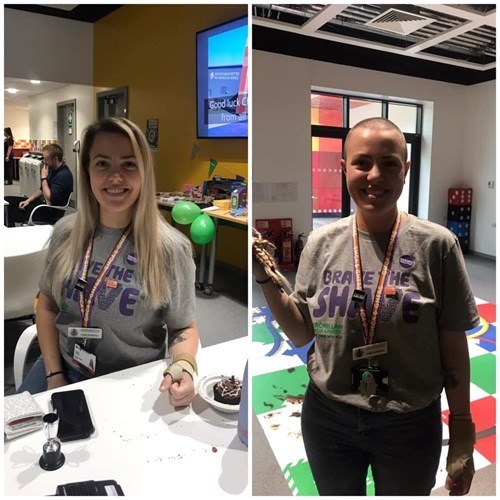 Charlie before and after the 'brave the shave' haircut.

Greater Manchester Fire and Rescue Service (GMFRS) recently held a large scale exercise at its training facility in Bury to test its emergency evacuation procedures in response to a major incident in a high-rise building.

Exercise Hertz 2, which took place on 30 August, is the second of four exercises planned for 2019/20, and utilised the lessons learnt from the first exercise in June to further develop and practice High-rise Immediate Residents Evacuation (HIRE) procedures.

The exercise involved 19 appliances from GMFRS, 15 specialist officers and colleagues from North West Fire Control (NWFC). Appliances were deployed from Bury Community Fire Station to Bury Training and Safety Centre where they were faced with a well-developed, multi-seated fire in GMFRS’ high-rise training facility.

Volunteers helped to enhance the scenario by acting as casualties, ensuring that the scenario was as close as possible to a real-world fire incident. (Written by Station Manager Jim Bridge) 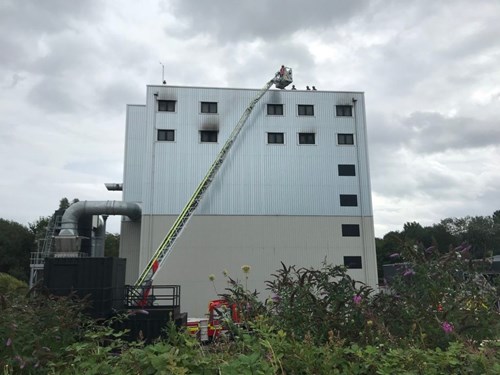 Recuing people from the high rise building at the training centre